We begin our journey through rugby jersey history in the 1800’s, soon after rules governing the sport of rugby were created. During the early times of rugby, men would commonly play in the streets in working clothes and gear—a dangerous feat since no one knew who their teammates were when teams did not have a set number of players.

Soon after, however, the first ever-documented “uniform” was worn by players of the Rugby School House team, who wore red velvet caps, white trousers, and white shirts with their own personal mottos. Soon, players began to wear their own colors, as laws governing uniforms had not been established. As the sport grew and team pride with it, the first “kits” were adopted in 1871 and consisted of ordinary shirts and bow ties, with a thin vest over the top and heavy-duty boots. Obviously some work still had to be done.

Players suffered from constricted play ability with current uniforms but that did not stop different teams from keeping the current uniforms and changing the uniforms to represent team pride. Team colors and kits that were created to match colored caps became more apparent as described by old accounts: The Rugby School should wear “dark serge trousers, black and scarlet striped jerseys and socks.”

Still, the uniform added to the danger of rugby. For example: “one Scot had his flannels torn off and was surrounded by players until he was handed a mackintosh in which he encased himself and amid considerable amusement repaired to the pavilion to obtain another garment.” Some players had more pride in the uniform than for the game such as an Irish captain who “was reported as regularly wearing a monocle when playing, taking it off when making a tackle.”

If there were no healthy players what was the point of playing in extravagant uniforms? This idea as well as numerous injuries brought teams to exchange current uniforms for more comfortable cotton long-sleeve shirts. Some adopted shorts and better footing for mobility. As rules governing the amount of players on a team were enacted it was easier to develop similar wear for players on the same team.

As rugby grew even more, and the sport took on a certain attitude, it was inevitable that rugby would penetrate fashion. In the mid 1900’s consumers who did not associate with rugby at all began wearing the striped jersey. Many thought the rugby jersey would become a fad and were stunned to find examples such as one New Zealand clothing company shipping more than 60,000 rugby jersey to the United States. What were referred to as “zany fashion fads” are still around and making money for many American and overseas apparel brands.

In addition to the complete surprise of striped rugby jerseys becoming a staple of casual wear came the anger among rugby fans against “fans” who cared more about the fashion than the sport. Soon that anger and lack of authenticity evolved into disputes between apparel companies.

As much as authenticity looms over rugby in fashion, there is a considerable amount of dispute over the authenticity players’ jerseys. The question becomes, how much can we alter the jersey to increase play ability while staying true to the original rugby jerseys? Over the course of rugby history the uniform had not changed until professionalism was established in the mid 90s – only then did sporting brands take advantage of the immense global sales with selling replica team apparel. To fuel the sales, new kits are introduced each year with subtle and sometimes drastic changes.

Further, how far will we go for originality by sacrificing rugby roots?

We can address these questions by starting with the many altercations to the rugby jersey. The original rugby jersey can be described as striped cotton shirts or colored cotton shirts depending on team colors. These jerseys then became more vibrant and technical in color and design. Companies substituted cotton for polyester nylon and spandex to reduce ripping and increase movement. Polyester nylon and spandex stopped absorption of sweat and dirt, and thus, kept players clean and caused others’ grabs to slip. In addition, jerseys had stiff collars made of rugged cotton twill and rubber safety buttons to withstand the roughness involved in the sport.
Soon after spaces on the jersey were taken by logos and emblems: the front of the rugby jersey usually depicted the team/club emblem, the left chest depicted the manufacturer’s logo on the right chest and the center displayed the logo of the corporate sponsor. These changes were usually a direct result of professionalism of rugby and the need to maximize advertising during an 80 minutes match with no commercial breaks. On the back of a rugby jersey, the name of the player and his team number are generally depicted.

*One of the first emblems in rugby jersey history. A simple flower.

Jerseys went through a drastic change when New Zealand and England teams wore Dri-Fit jerseys made of hi-tech material called Dri-Fit stretch-woven ripstop, a mix of lycra, cotton and polyester that hugged the players’ bodies and removed sweat. More technology prevents jerseys from from being gripped by other players. As useful as technology is, it has completely changed the jersey by removing the collars and buttons and even the look and feel of jerseys. However, these jerseys had players changing into new jerseys after their Dri-Fit jerseys kept ripping.

The Australian Wallabies also wear a reinvented jersey—a fabric combining DuPont Textiles and Interiors and Canterbury’s existing Temex® fabric that is 25% lighter but 10% tougher. To please fans and remain authentic, the jersey kept the original Wallabies design. However, the jerseys caught much criticism as they looked like “built-in bras” or Wallabra and the shortened collars made the jerseys look like “something between a soccer shirt and a Star Trek uniform.”

Who could forget the debut of the Stade Francais kit with the Warhol inspired Blanche de Castille? Which soon turned a club into a brand empire with it’s designs and flash. Stade Francais made pink acceptable on the pitch. Amateur clubs can now order their kits in pink if they so wish, regardless of manufacturer.

Needless to say, fans around the world were shocked and intrigued with many new jersey designs and innovations over the last 10 years. One jersey design that had fans completely surprised was the “AdiThread” jersey worn by the All Blacks. The All Black jersey is naturally untouched in it’s design, but finer improvements have been made over the years. 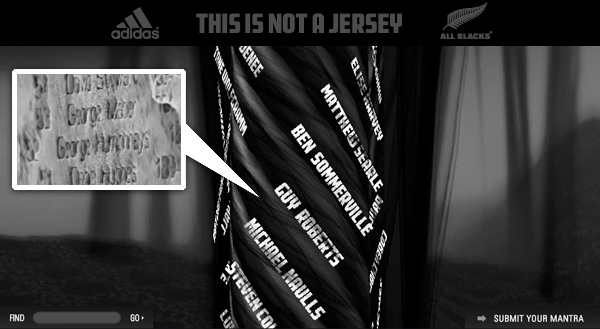 The AdiThread allowed All Blacks’ jersey manufacturers to make jerseys that have the names of 100,000 fans engraved onto a single thread. The All Blacks rallied their entire nation by allowing fans to visit their website and submit their names along with a short sentence that began with thew ad campaign: THIS IS NOT A JERSEY Famous submission examples included “This is not a jersey. This is men against boys,” and “This is not a jersey. This is pure commitment to our nation.”

As a new era dawns on the sport and it’s global growth is fueled by new and emerging markets dormant for so many years, rugby fashions will continue to inspire, evolve and redefine sporting and casual apparel. Expect the unexpected. Honor the traditions and no matter what color or bra-looking strap appears on your jersey, the actions will speak for themselves when a team takes the field.